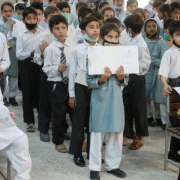 Gender equality in education is a priority for us which we never neglect. We want to achieve gender equity knowing that the existing gaps in girls’ education are affecting our economy and development. Take the example of Pakistan which has been struggling for long to achieve this status in education. Million of girls in Pakistan are out of school – which is almost the total population of many countries!

The question that pops out is why my country has to face such crises in girls’ education? There are complications to it.

In the first place, cultural and social taboos do not encourage girls to seek education in South Asia. Recently, the situation has started to change and, to some extent; people also have started thinking outside the box and knowing the importance of education have started encouraging girls to seek knowledge. Thus many parents have started to support education for their daughters. However, many other issues still persist. Unfortunately girls in the rural areas have to suffer the challenges to access education and in many cases are victims of poverty as well.   These challenges to girls’ education are not only prevalent in rural areas but are also present in metropolitan cities of Pakistan like Lahore where we can witness these challenges regarding girls’ education. Millions of girls are out of schools in the present scenario. The major challenges identified up till now that impede the girls’ access to education are the social constraints, gender discrimination, wrong religious perceptions, lack of education , early marriages,  lack of infrastructure, transport, hygienic facilities, poverty, absence of safe environments and physical disabilities.

Let’s go a bit in detail about these challenges

Social constraints: The Pakistani society is always against the freedom of women so they are not in favor of girls education. They want the girls to stay back at homes when their counterparts go out for education and then jobs, which can also be named as gender discrimination.

Wrong religious perceptions: Not only Pakistanis but Muslims throughout the world go with their misconceptions about the women education. We need to rectify this misconception as more than half of our population comprises of females which is directly proportional to the development of our country.

Lack of hygienic facilities: Absence of boundary walls and restrooms are big barriers to girls’ education.

Lack of Transport: The transport facilities in Pakistan especially in rural areas are not sufficient for girls. The schools are far away and transport links are unavailable so it becomes difficult to ensure that girls can attend the schools. In this situation parents also do not feel their daughters safe to travel alone as schools are faraway. Lack of hygienic facilities. There are meagre hygienic facilities in schools which affect the students health and is one of the reasons of drop outs.

Safety: In rural areas, in particular, harassment and rape rates are increasing day by day. The people in charge need to improve the existing law and proceed with the implementation of anti-harassment law 509.

Poverty: The government of Pakistan has commissioned many programmes to provide stipends to school girls. Though It helped the girls to some extent, as the amount helped them with resources and the parents sent their daughters happily to schools. The idea of entrepreneurship skills, vocational and part-time skill-based trainings helped overcome poverty which lead to a greater change.

Physical disabilities: There are no provisions for the physically challenged people so these girls lag behind the normal students.

Lack of safe environment: The environment in Pakistan is still not safe for girls which is a major issue in girls’ education. Many cases of harassment and rape have been reported in many areas but are kept confidential, no action has been taken due to which many parents fear sending their daughters to schools. Political leaders, parliament members, media, youth and other stakeholders are having continuous policy dialogues on this issue. Different issues are being raised and highlighted in these dialogues. Suggestions and recommendations are established and presented to the parliament for further implementation Gender equality and equity, the upgrading of girls’ primary schools, financing and the availability of stipends to girls from affected families in order to help them access education. 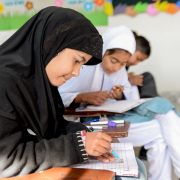 Our goal of inclusion in the ARPD Inclusive School System is to build such a community where anyone and everyone belongs. It has been proved by research that students who get educated together have a greater understanding of diversity and mutual differences. They have fewer fears about physical challenges and inclusion. An inclusive school creates a culture creating better long-term outcomes for every student.

Typically students who get educated alongside peers having developmental disabilities understand more than those who are educated in a separate environment that they’re all alike. These students will be our children’s peers, group members, and friends. These students promise the creation of inclusive communities in the future for all of our children. They will be the future parents, teachers, principals, doctors, businessmen, and women as well as lawyers who will help in building communities where everyone belongs.

Now we need to understand what inclusion is; it is a system that removes the barriers with a narrower concept of who belongs in normal society rather than just mainstreaming or integrating those students who were primarily characterized as special or seemingly different from normal.

The physical and social structures must be welcoming diversity (i.e. physical abilities, culture, gender identity, ethnicity, and class difference). Therefore it is the demand of the day to remove the barriers faced by the teachers, parents, and students in this regard. Also additional supports may be required to ensure the respect of all individuals’ rights to access the facilities and technologies permitted to normal students and inclusion.

ARPD’s President Anjum Anwar has ensured this activity by providing all these facilities as much as possible. We are teaching the street children making sure that there are no differences among the students and their learning. We hope to bring a positive change in society through our school and spread awareness among our teachers, parents, and students.